But he did not kill her, because in between dream and act
there are hindering laws and practical issues,

Pension may be considered as something for the distant future by generation Z, yet they are the generation of the future. What are their dreams? What are they doing to achieve these? And what is standing in their way? This series is intended to let young people speak about the way now and later on is perceived by them.

Maggy Schaap (27): “Putting yourself first is not selfish, it will eventually benefit the world”

Who: Maggy Schaap (27). She describes herself as an enthusiastic woman of feelings with a positive attitude, who is not afraid to rely on her intuition.

Lives: in a rental apartment of 57m2 in Amsterdam she shares with her boyfriend. “We had to earn approximately four times the monthly rent to be able to rent it. Buying was an option back then as well but weren't sure whether we wanted to stay in Amsterdam or not. Now that we have both started our own business, things have become a little less uncertain. But I am trying not to let the news about the housing market get to my head too much. I could be worrying about the future but who knows, the situation may be entirely different again in a couple of years.”

Works: as self-employed coach (https://www.instagram.com/goheartflowhard/). She gave up her job in sales to start this new business. “I had a good salary, managed a team of twelve account managers at a certain point; everything went really fast. Yet, something was bothering me. Was this job what I really wanted to do or did I do what I believed society was expecting me to do and what I, unconsciously, expected of myself? That feeling grew stronger and stronger. I followed an education to become a coach and quickly felt that this was what I really wanted to do. I quit my job a year ago and started to work as an independent coach. I mainly coach millennials who are experiencing a similar situation to the one I was in. I try to make them aware of limiting beliefs and try to make them become happier.”

“I often work with people one-on-one at the moment, but eventually I would like to make an impact at a larger scale. My ultimate dream is for everyone to start listening to their inner selves and not to be scared to follow his or her heart. We want to meet expectations, set by ourselves and society, but we sometimes forget what it is we really want to do. Putting yourself first is not selfish, but actually contributes to a better world. Only when you are happy yourself, you can mean a lot more to others. That's the message I want to convey to as many people as possible. I am already quite active on social media and, as of recently, started recording a daily podcast, but I hope to be able to grow some more in that field. If at all possible. I also want to be financially independent. Follow my heart's desire without feeling the urgent need to work in order to make ends meet. I would like to dare dreaming bigger in that respect. You don't necessarily have to work in paid employment and retire at the age of 67; there are other ways as well.”

How do you envisage your future?

“I want to further develop my coaching activities and I hope to be able to help a great deal of people. I have faith that my company is able to grow in a somewhat effortless way. People often say that you have to work hard in order to make your dreams come true. I have nothing against that, but it is also possible without getting ahead of myself. It would be wonderful should I be able to have another house in Spain or something later on, or to travel more. And I would really like to have children someday.”

“I don't really think about that just yet, to be honest. I live in the moment. Once I earn a bit more money, I will start putting money aside or open an investment account for my pension. My parents are both entrepreneurs as well. When I see how much enjoyment they still derive from their work, I think I also want to continue working well into my old age. But less hours though. That would be amazing I think. And other than that, enjoy travelling, nature and, who knows, my children and grandchildren.”

“The Netherlands is a privileged country, but I believe it still has a lot of unhappy people. The basis is solid: we have enough to eat and there's actually not a lot to complain about. It would be great if the Dutch were somewhat happier with everything they do and dare to express what it is that makes them happy, without encountering other people's judgments.”

What do you believe goes well in our society?

“The fact that we are way more aware of, among other things, food. It could be my Amsterdam bubble, but there is an increasing amount of people who eat vegetarian. That's a good development in my opinion. I also feel as if the Netherlands offers increasingly more room to be yourself. My mother is married to another woman, and that doesn't cause any problems. As a child I was feeling a bit ashamed, but now it seems weird to me that I felt like that before. It seems not to be an issue anymore when you are attracted to people of the same sex. But it's very difficult for me to assess whether the tolerance in that area has truly improved.”

Another thing that also concerns me at times, is the fact that so many people are unhappy. Even young people are faced with a burnout sometimes.

What could be improved in the world?

“We should be a bit less judgmental about others and about ourselves. It would make a huge difference if we don't always come up with an opinion about someone else's behavior. That really frustrates me sometimes. I believe people should first take a look at themselves. It's only human to judge, I am not a saint myself, but at least I am trying to be conscious about it. You never know what goes on in other people's lives.”

What are your matters of concern in view of the future?

“The climate crisis. I don't delve into the subject to an extreme extent, but I am trying to contribute wherever I can. We cannot just close our eyes and pretend it's not there; we have to be even more aware of what's going on with our planet. Another thing that also concerns me at times, is the fact that so many people are unhappy. Even young people are faced with a burnout sometimes. But I am optimistic in general, I feel as if everything will work itself out in the end.”

“The way animals are treated in the bio-industry. That truly bothers me. I eat and drink a plant-based diet as much as I can and inspire my parents to do the same.” 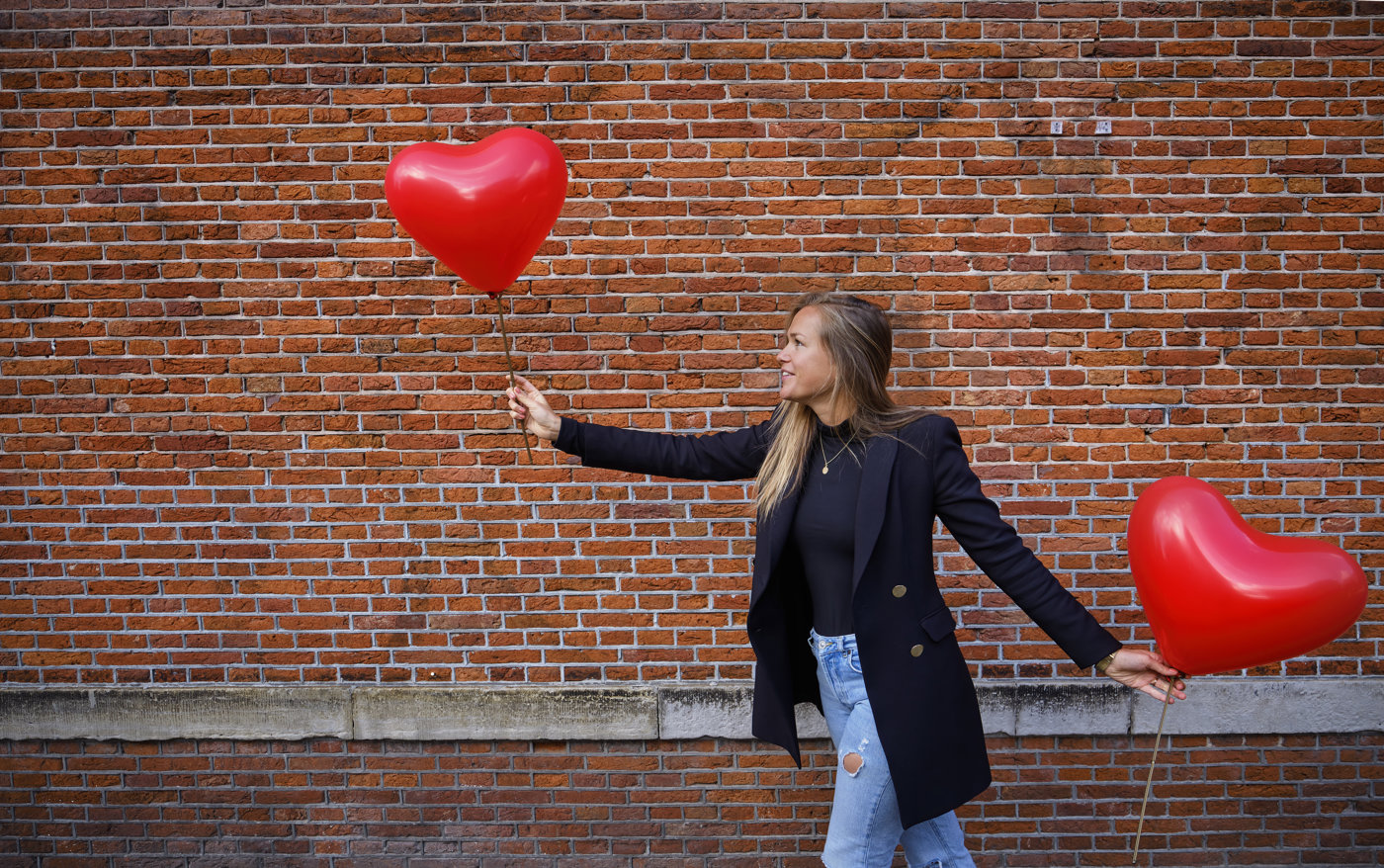 What is standing in the way of realizing your dreams?

“I think what's mainly standing in the way is your own self. I have limiting beliefs and thoughts as well. It's sometimes difficult for me not to let myself be guided by the opinion of others. Fortunately, the responses I get on social media so far are positive, but I notice that I post my messages in a very nuanced way and find it hard to express my opinion on certain matters. Probably because there's not a one-fits-all solution and I am always trying to look at a situation from different perspectives. But maybe it can be the case that I also let myself be limited sometimes out of fear for other people's opinion.”

What do you do to realize your dreams?

“I jumped in at the deep end to make my dream come true. That is not always easy. I have left behind a certain form of security, although security is also subjective of course. I am very busy working on my personal development which is important to stand my ground. I am committed to grow on a daily basis, although I don't see the result of my efforts every day. Yet, I am trying to hold on to that commitment.”

And what do you do to make the Netherlands and the world better?

“Have my company grow, so I can contribute to making people more themselves and having them do what it is they really want more often. The more happy people in the world, the better equipped they are to take care of the world we live in.”