"Is the fear of the inflation specter justified?"

Because in between dream and act
there are hindering laws and practical issues,

Pension may seem like something in the distant future to generations Y and Z, but they are the generation of the future. What do they dream of? What are they doing to accomplish that? And what stands in their way? In this series, we invite youth to talk to us about what now and the future look like to them.

Indya Duivenbode (27): “We have to work together to make growing older in good health a priority.”

Residence: A rented house in the inner city of Rotterdam, with her boyfriend and her dog. “We would prefer to buy. But, even though we pay 1100 euros in rent every month, we were not eligible for a mortgage of 700 a month. It doesn’t even make sense.”

Work: Health economist Indya was a consultant in the care sector, but she quite her well-paying job earlier this year in order to start her own company, with which she wants to make more impact. “Zorgstelsel Unpacked” (The Healthcare System Unpacked) is an online community that is focused on the healthcare system. Indya has two aims: to make the healthcare system less complex and to connect parties with conflicting interests.

“I dream of being able to design my life in a way that suits me, rather than conforming to what ‘society’ expects of me. Until recently, I was following the beaten path. Now I have quit my secure consultancy job to do something that suits me better. I’m trying to let go of limiting beliefs. For example, I thought that having a dog did not go hand in hand with a career. But when the corona virus broke out, I adopted one anyway. If I keep putting it off, I thought, I won’t have a dog until the time I retire. All around me I see people living for tomorrow instead of now. It is my dream to live more in the moment. I don’t always manage that yet, but I think it’s very important."

“It may sound a little vague, but I hope that I’ll be doing something that I can’t even imagine yet right now. The thought of knowing exactly where I’ll be in five years is not attractive to me and seems very limiting. In the future, I hope to have grown and learned a lot. Overall, I do see the future as bright. If entrepreneurship doesn’t work out, I know I’m privileged enough to be assured of salaried work for the rest of my life. I don’t know yet if I want children. I think not having kids gives you a lot of freedom.”

What does your pension look like in your dreams?

“I would like to be financially independent before I retire, just like many others of my generation would. I hope I won’t have any money worries and won’t need to work anymore, long before my so-called retirement time. I’d love to be able to keep doing what I enjoy most, and to help others. Not to get rich, but because it feels good. And I hope to grow older with my boyfriend in good health.” 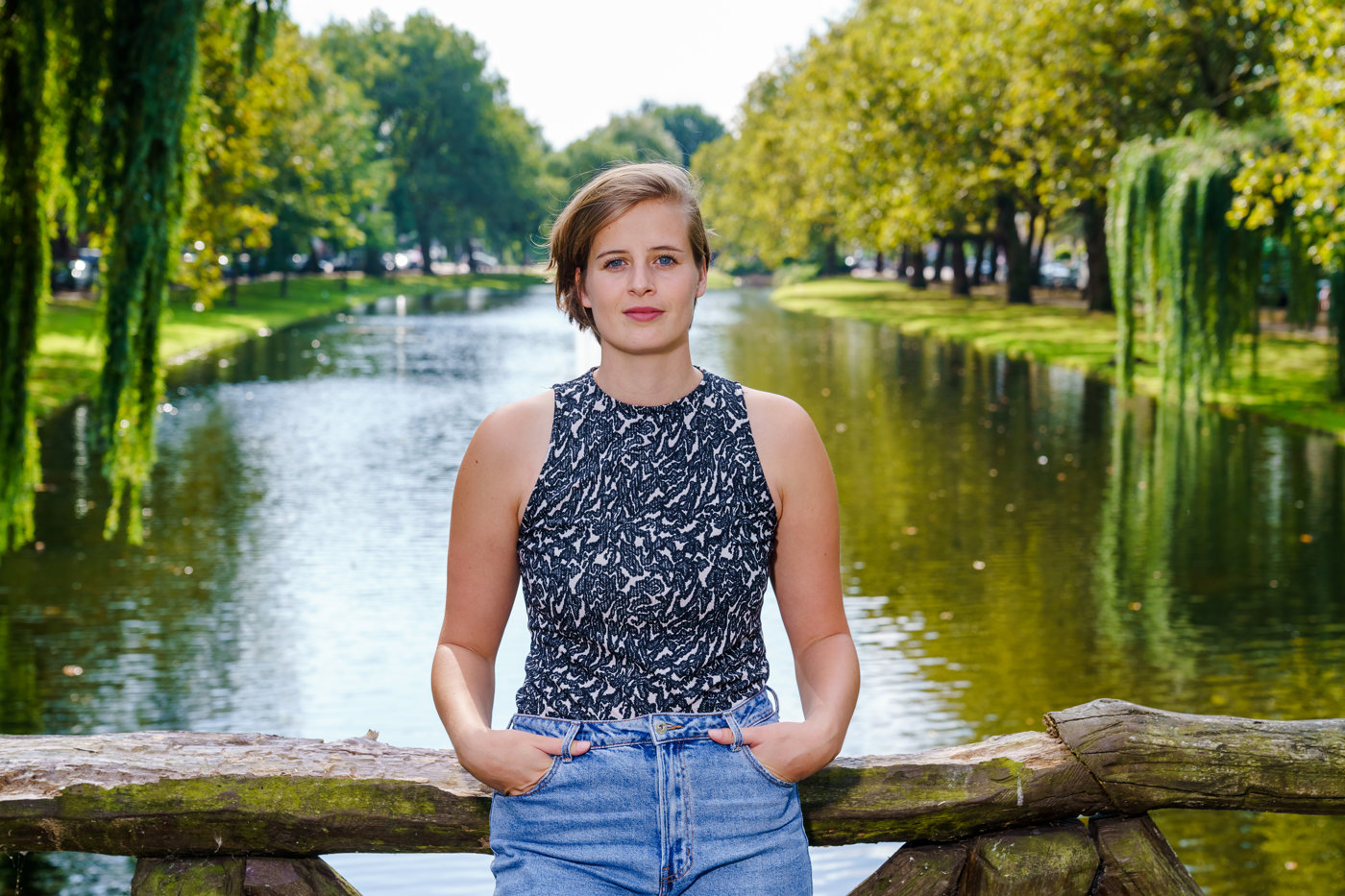 "For everyone to grow older in good health. I am very passionate about this. Together we must ensure that healthy ageing becomes a priority for all Dutch people. I also dream of a Netherlands without discrimination and with more empathy and understanding. I identify as a feminist, and am still learning more about exactly what that means every day. I am a white, highly educated woman, I can speak from my own experience about male-female relationships, but feminism goes much further than that. I don’t know what it’s like to be discriminated against because of your background, religion or a disability. I think it’s important to be aware of your privileges, and to have understanding and empathy for people who are in a different situation. You should never feel better than anyone else, but certainly not less either. Those are principles I try to live by. I strive for equality.”

What do you see in society that you like and what makes you proud?

“I like seeing how many small initiatives there are at the grassroots level to connect people. In my neighborhood there are language cafes, for example, where different cultures can learn Dutch together, and there is a park that is maintained by the neighborhood. What also makes me proud is that my generation and the generation just after us are, in my view, much more concerned with making an impact than with making money and having a nice house. There are few young people denying the climate crisis, and I feel like we are thinking a lot about how everything can be better and more equitable. That gives me hope for the future.”

What could be better in the world?

“Haha, do you have a few hours? First of all, everyone should have equal opportunities and there should be less prejudices. That would improve the world. There is also a lot that can be improved in the healthcare world. There is an ever-increasing staff shortage, for example. It is expected that by 2040, a quarter of the Dutch population would have to work in healthcare in order to provide adequate healthcare services. In other words: that’s impossible. Healthcare must therefore be organized differently so that services can be delivered with fewer staff, and the demand for care must be reduced through prevention. We have reached a point where we have to get creative. Because we won’t be able to solve it by 2040 with a bit of polishing. It’s a complex issue that we should all be working on together.”

My biggest worry is still climate change. What is the most helpful thing to do?

What worries you about the future?

“My biggest worry is still climate change. What is the most helpful thing to do? What can you affect? How can you contribute something? I find it very complex. But looking the other way and not doing anything is not an option.”

“Discrimination, inequality, racism, ignorance... Those are things that make me angry. I’m often asked, primarily by men: do we need feminism? Some people think I hate men. But men are not the problem. The problem is society, which is conditioning men a certain way. Once you see what’s wrong, you can’t unsee it anymore.”

What is in the way of your dreams?

“People without empathy. It’s also discouraging that at my work I’m not always appreciated for shaking things up in healthcare by making taboos discussable. That makes it harder.”

What are you doing yourself to make your dreams come true?

“I gave up my job in consultancy to make more of an impact in healthcare. That means I probably won’t be able to buy a house for a while, but I believe in what I'm doing so much that everything else has a lower priority. On the one hand, I’m trying to make progress this way, and on the other hand, I hope to inspire others to walk their own path as well. I’m already noticing that people around me are increasingly knocking on my door if they want to brainstorm about life choices. I love that. I believe that the world will be a better place if everyone does what is right for him or her.”

And what are you yourself doing for a better Netherlands and a better world?

“I believe that my company is going to make the Netherlands a better place. I am putting a lot of time and energy into it, to make the healthcare system more comprehensible and I’m working on a community to connect care professionals, managers and policy managers to each other. I want to create equality in a world that is still very hierarchical. I also try to stand up for people who are less privileged, even if that makes me less popular.”

“Dad, are you a girl again today?”

“How much higher are energy prices going to go?”