"That collegiality is even more important than all financial arrangements"

Today, June 1, is Global Day of Parents. This day recognizes the crucial care and dedication of parents in raising their children. After all, this is not always easy to achieve, especially with a full-time job.

Mike Jongerius works in APG's HR department and became a father for the third time in April. How does he combine looking after his children with his job?

Before, June 1 was not Global Day of Parents, but Children's Day. In several countries, such as Poland, Romania, Russia, Hungary, Czech Republic, Portugal, China, USA and Germany, Children's Day is still considered a festivity. Parents take their offspring on an outing and give them gifts. In 2012, the United Nations designated June 1 as Global Day of Parents. Since then, Children's Day on the Dutch calendar has moved to June 25. But few parents here are probably familiar with these holidays.

Mike Jongerius (38), who has been working for the HR team Data & Analytics for six months, had in any case never heard of it, even though he has now quite mastered parenting: his wife and he have two sons and a daughter. Their oldest child is 4, the youngest almost 2 months.

Mike is a committed father. It is natural for him to be closely involved in the care of his children. Several official arrangements aid him. In April, for example, after Elias was born, he was given five days of fully paid post-birth leave. And since July 2020, it is possible to take five extra weeks of additional post-birth leave in the first six months. Under the Dutch Work and Care Act, 70% of the wages continued to be paid in that case. However, APG supplements this benefit up to 100% of the salary. "I use the full five weeks," Mike says. It is a popular arrangement: in 2021, 81 new parents at APG made use of it. 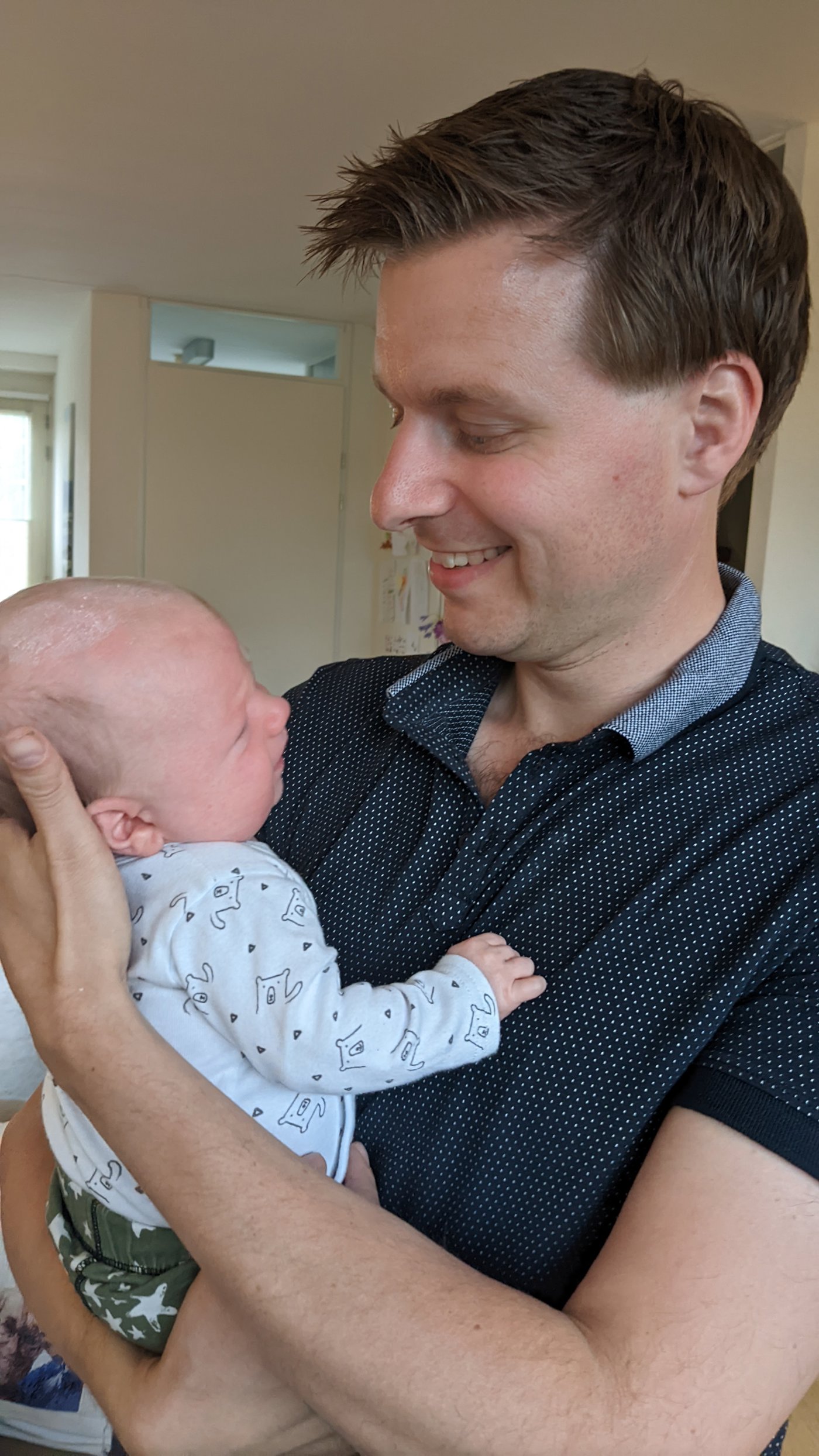 "Being able to work flexibly is something that really helps you as a parent. If necessary, I can start a little later at home or leave for the office after rush hour, when the children have gone to school or childcare. That flexibility – and a manager who thinks along with you – is even more important than all financial arrangements. Having a job, a baby and two young children is quite a busy life. That means you're less focused at times and then it's nice if a colleague is willing to do something more at a time when things at home don't go as smoothly as planned. I can determine my working hours to a certain extent. The fact that you can arrange this within your team, that sense of mutual collegiality, is very valuable to get everything done. This makes the combination of care and work manageable as a young parent."

When his wife goes back to work, Elias, like his sister, will also go to childcare twice a week. His eldest brother attends after-school care. A hefty expense for parents – despite all childcare allowances. This allowance is jointly financed by the government and the employer. How much you receive monthly depends on the level of income, the number of children and the type of childcare - which is also subject to a maximum hourly rate. With three children, that can be quite expensive. "I think we've already spent around 700 euros per month on childcare for two children," Mike estimates. "In any case, it's our biggest expense."

APG bears part of this with an extra childcare contribution of 300 euros net per year. Of course, on the total amount that is a drop in the ocean. "But other employers don't offer that," says Mike. "So it's quite nice." He shared that opinion with 471 other APG employees who were entitled to this in 2021.

Higher contribution for working parents
There is light at the end of the tunnel. The Rutte IV government wants to increase the childcare allowance for working parents to 95% in the coming years. This is set out in the government's coalition agreement ‘Omzien naar elkaar, vooruitkijken naar de toekomst’ (Looking after each other, looking ahead to the future).

It will take a while before that is finalized, so let's celebrate the Global Day of Parents first. And then perhaps Children's Day, with festivities and presents? Mike doubts the latter. "I'll stick to Sinterklaas for the time being."

"Listening carefully within your own organization"

“The introduction of the new pension system is a huge challenge”

Annette Mosman is Top Woman of the Year 2022

“We always say: compliance is really for everyone”

Thijs Knaap about the work of professional investors in youth podcast