“If everyone retired at age 40, our society would collapse”

Puttering around in the vegetable garden at your cottage in the Swedish woods. Having the luxury of not sitting down with your laptop on Tuesday mornings but going for a nice walk instead. Taking a forestry course or finally opening that pop-up restaurant. These are just a few of people’s dreams about their retirement. Only these are not the dreams of people in their sixties, but of people in their twenties and thirties: Rowan (27), Saska (30) and Puck (33). And they don't want to make those dreams a reality after age 67, but preferably before age 40 or even earlier. Elsewhere in APG Newsroom, we asked these millennials to talk to us about their outlook on life and how they are funding their early retirement.

The FIRE philosophy (Financial Independence, Retire Early) plays an important role in this: achieving financial independence as early as possible in life by living (frugally) on the returns from your investment portfolio. That sounds nice, but is it also feasible and socially desirable? We asked Charles Kalshoven, Thijs Knaap and Eduard Ponds, all three of whom work at APG for the Asset Management department, which is responsible for investing 560 billion Euros worth of pension money (as of November 2020) for 4.7 million participants through the affiliated funds. It led to five caveats (but also two benefits).

FIRE-adept people put as much of their income aside for investing, sometimes as much as half. Can young people build up enough pension capital independently for their early retirement?  Charles Kalshoven: “People increasingly want to be self-sufficient and independent; this is a trend in society. They want solar panels to provide their own energy and increasingly, they also want to arrange their own pensions. But as an individual investor, you’ll never be able to equal the results and risk-spreading of a professional party. As APG, we can use a good mix of, for example, shares, real estate and long-term investments in infrastructure, with which we also contribute to society.”

Eduard Ponds, who, in addition to his position at APG, is a special professor of Economics of Collective Pensions at Tilburg University: “Time and again, research shows that professional investors achieve better results than individual investors.”

The FIRE supporters themselves, incidentally, think differently. They often assume an expected return (including dividends) of at least 7% on their investment portfolio. Four percent to live on, 3% for inflation adjustment. “The expected return on equities and especially bonds is no longer as high as it used to be,” warns Kalshoven. “We are noticing that at APG ourselves,” adds coworker Thijs Knaap. “So, if you’re counting on an average 7% return, you might be a bit too optimistic after all.”

Moreover, FIRE supporters run the risk of still having some life left to live when their retirement capital runs out, Ponds calculates. “If you take 4% out of your retirement capital and have an investment policy of 50% stocks and 50% bonds, you probably won’t go broke for the next 30 years. But after that, it becomes critical as life expectancy keeps increasing, to a hundred years or more.” Pension funds absorb that longevity risk with collective reserves. Knaap: “People can receive pensions for as long as they live, because you can draw on a larger pension pot and not everyone lives to be that old. If you retire at forty and live to be a hundred, you run the risk of not saving enough for those sixty years.”

Caveat 3: If the stock market crashes, you’ll be without (sufficient) retirement capital

In the spring of 2020, a third of stock market value was lost due to the corona crisis. In 2008, we experienced a financial crisis. Kalshoven: “If you are an independent investor and you experience a stock market crash, or you have invested in a company that goes bankrupt, you could see your assets, and therefore your pension, go up in smoke.” Individual investors sometimes make the wrong decisions in a stock market crash, Knaap tells us, such as selling shares at the market's lowest point or taking irresponsible risks. “If you have saved tons yourself and half of it evaporates, it also causes a lot of stress and you sleep badly.” A professional investor like APG also suffers from this slumping stock market, Knaap acknowledges, but does not panic and can absorb and compensate for temporary losses more easily.

Caveat 4: Managing your retirement capital yourself is hard work

Particularly in a crisis, people often lack the knowledge and experience to invest their retirement money themselves, says Ponds. Most people don’t want to do that either, he says. “They think it’s important for their employer to offer a good pension plan, but they’re not interested in the details, research has shown.” It’s also just a lot of work to invest your capital as effectively and sustainably as possible at the lowest possible cost and acceptable risk, Knaap argues. “We have a day job doing that at APG with about a thousand colleagues. So, we look at supporters of FIRE like the construction worker looks at the do-it-yourself enthusiast: maybe some people can invest for their own retirement, but why would they want to? Actually, you’re still not free; you just have an additional new job.” Caveat 5:  Society will come to a halt due to too many people retiring early

So, these three APG employees have some reservations about the FIRE philosophy. Not to mention the fact that early retirees voluntarily forgo their greatest earning potential - after age 40 - and the joy, identity and self-actualization that work can bring. “You invest too little in education, experience and networking to take full advantage of your accumulated human capital later in your career,” Kalshoven says.

Their greatest reservations, however, lie in the social sphere. “If we all retire at forty, who will serve the espressos on the terrace, cut your hair and teach your children?” laughs Knaap. Ponds is more adamant: “We need to watch out for a generation of free riders, drop-outs who make no contribution to society but who make use of the infrastructure and care services, for example. If there are too few working people left, we will no longer be able to finance those collective facilities and our society will collapse.”

Still, the three APG employees do see some positive points in the desire of many millennials to structure their lives, work and retirement differently than their parents:

Benefit 1: Fantastic! People in their twenties and thirties are finally showing an interest in their retirement…

“Most people under forty are not concerned with their pensions and often don’t even bother to open their UPO, their Uniform Pension Statement,” Knaap sighs, while his two coworkers nod in agreement. “To most young people it’s a deadly dull, technical and complicated subject. These people in their twenties and thirties are looking into their pensions, and that’s a big plus.” 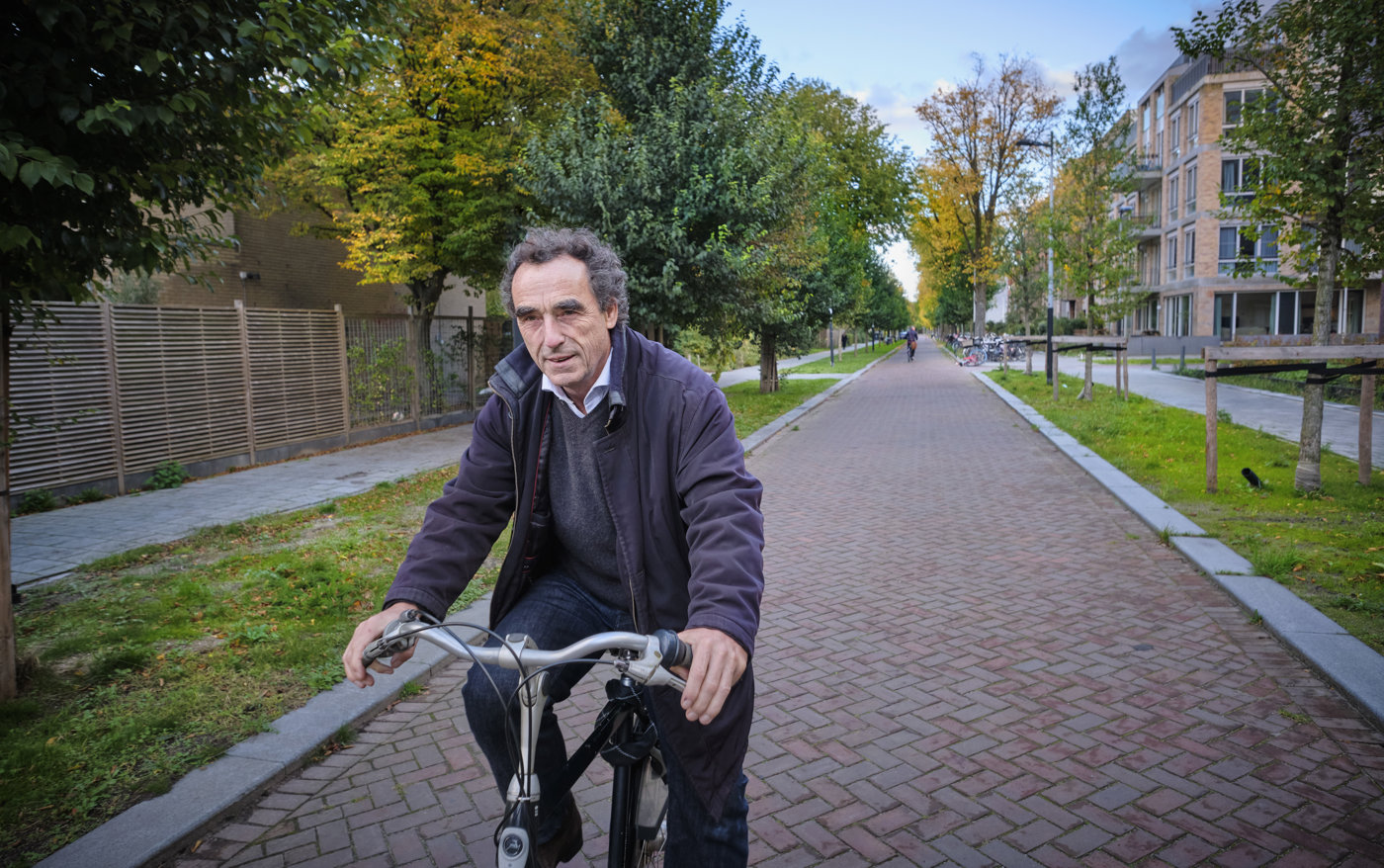 Benefit 2: … and they’re taking financial control of their lives: even better!

Followers of the FIRE philosophy live frugally, save a lot and look ahead. Knaap again acts as spokesperson: “These millennials are taking financial control of their lives and are self-reliant: an enormously positive development. They don’t need an expensive car because the neighbor has one, or a top mortgage. If people borrow less and have more buffers, we, as a society, will be able to absorb economic shocks better.”

Could APG perhaps meet FIRE supporters and other millennials halfway, for example, by making part of the pension balance withdrawable for a sabbatical or mortgage payment? By abolishing mandatory pension accrual through employer and pension provider, like they do in other countries? Or by exchanging the collective pension pot for individual pension pots?

A lot of hard thinking is going on at APG about pension innovation to better reflect different preferences in society, is the unanimous response. Ponds: “We're eager to learn from the younger generation.” Moreover, the new pension contract is already putting more emphasis on people’s own responsibility and a shift towards more individual pension assets. “It’s starting to look more and more like an ordinary bank account,” says Knaap. But it takes time to adapt a pension system that has been developed over the past 100 years. We must also preserve what is good about it - principles such as solidarity, risk-sharing and compulsory membership - the APG people believe. Kalshoven: “Millennials may experience that as paternalistic, but the majority of Dutch people find saving and investing themselves difficult and are thus protected from poverty later in life.”