Bankrupt off the field

Top soccer players earn millions, but the money often drains out in no time. They live in a make-believe world with private jets, designer clothes and extravagant indulgences. When their career is over, more than 60 percent of the European soccer players go bankrupt.

Soufyan Daafi created the company Sport Legacy and Kenneth Vermeer became their ambassador. Their goal: to create awareness. “They think about their financial future much too late.”

Luxury vacations on tropical beaches. The most expensive cars. VIP tickets to the most eccentric parties. Extravagant watches and a harem of “gold diggers”. If you follow the top soccer players on Instagram you will see a world of unlimited extravagant indulgences. A world where money is spent by the ton. But the reality behind it is really tough. The road from millionaire status to bankruptcy is shorter than the fans realize.

Former international player Kenneth Vermeer, also former goalie of Ajax and Feyenoord, plays in sunny California these days, for Los Angeles FC. He is concerned about former soccer stars who fall into a miles-deep, black hole at the end of their careers. His former teammate and friend from his younger days at Ajax, Soufyan Daafi, started the company Sport Legacy and Kenneth Vermeer joined him as an ambassador for the company. Sport Legacy’s vision is to help where possible in a bizarre soccer world where nothing is what it seems.

Soufyan Daafi: “Not everyone gets to have a career with an income of millions. I saw it all around me. One of my best friends, Kenneth Vermeer, was a champion with Ajax for three years. At one point he was benched, and it was not certain if his contract would be renewed. There was no interest from foreign clubs. That was when I realized how big the risks are when that soccer income disappears. Kenneth was fortunate and got signed on with Feyenoord.”

In a world where a 17-year old youth can become a millionaire in one day, you might wonder what big clubs like Ajax and PSV are doing to keep their talents on tracks

“The club always recommends for everyone to speak to a financial advisor. Sportdesk ABN Amro, for example is active with Ajax. For AZ it is the Rabobank. But that help only goes so far. When serious financial problems occur, all the parties end up point the finger at each other. The club will say: ‘That’s what the agents are for.’ The agent will say: ‘We assist the player, but he is responsible for himself.’ And the player looks at both parties: ‘I need your support.’ And that is what we want to do now, with Sport Legacy. Making players aware that they should not fall into all kinds of financial traps but should ask for help before any of that happens.”

Most soccer players have a spending patterns of between 5000 to 30,000 Euros a month

“We keep in touch with agents, the clubs and the players to prevent problems. 62 Percent of the players go bankrupt when their career is over. We want to drastically decrease that number. In America, those percentages are even higher; in the NFL, it is as high as 80 percent. It’s easy to explain. When you’re making millions, it feels like it will continue forever. Most soccer players have a spending pattern of between 5000 to 30,000 Euros a month, or more. When you’re used to a certain amount coming in every month and then it suddenly stops and you only have a million or two in your bank account, you’ll be bankrupt in as little as five years.”

Especially in videos and photos on Instagram, soccer stars are increasingly exposing their sometimes exotic lives. A weekend on Ibiza with the private jet, a road trip with the latest Bentley. And in between, going to the most exclusive parties, dressed in expensive designer clothes and dripping with jewelry, where the jetsetters are served the most expensive champagne.

Soufyan Daafi: “Players think it’s the norm, but it is a make-believe world. I’m currently having conversations with guys that have nearly a million followers on Instagram but are in big trouble financially or feeling depressed. I’m not saying don’t use Instagram, but what do you use it for? As a platform for your own branding, which is fine, or to show off your life of luxury to the world?”

Do players around age thirty think about their financial future?

Soufyan Daafi: “Yes, they do, but often much too late, unfortunately. They accrue a CFK pension fund. The purpose of this is to offer a player/runner a financial base after his professional sports career, so that he can focus (better) on his new career. We are also talking to those players. The CFK sees soccer players as a nice asset, but also a liability, because they can’t touch their money. I talk to soccer players whose careers are already over and have made arrangements with the CFK to get paid in the coming twenty or thirty years, but they’re thinking, ‘I need it now’. For example, to develop a real estate portfolio. The CFK program doesn’t allow for that.”

But there are positive examples too. For instance, international player Ryan Babel. The former Ajax player decided to delve into money matters and he ended up becoming a real estate entrepreneur. He has been thinking about his soccer retirement for years. “I want to at least maintain my current lifestyle. I don’t want that to decline,” Babel says. He is buying houses and apartments all over the world. At the recommendation of his agent, he purchased a new apartment every quarter. Babel is now working closely with Sport Legacy.

Soufyan Daafi: “Wat Ryan is doing right is that he realized early on: ‘I want to keep my current lifestyle. I want my kids to keep going to private schools, I want to have nice vacations, I want to be able to keep visiting those beautiful places I go to now.’ He realized he would need a big income for that. And that in the Netherlands there is virtually no job that will pay as much as his soccer salary. So, he figured out what his options were. He went into real estate with this goal: After my soccer career is over, I still want exactly the same monthly income I have now. I admire Ryan, because he also wants to share what he has been learning with the younger players. He tells them: ’When you get your first contract, don’t buy a Bentley; do something useful with the money.’ I’m learning a lot from him.” 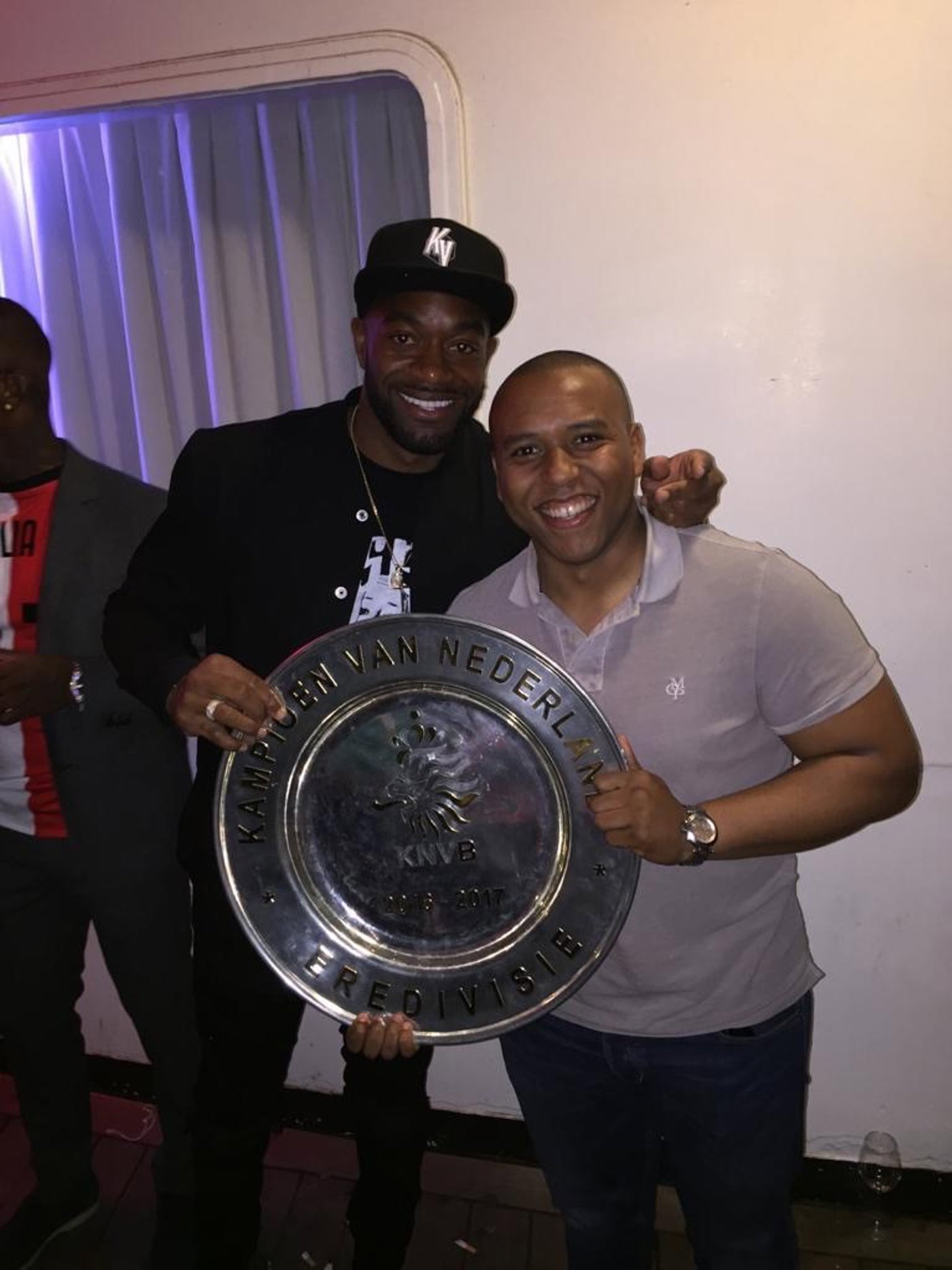 Are these problems common in the Netherlands?

“It’s not substantiated with numbers, but I have a sense that it is. When you look at how many talents there are in the Netherlands. Even just looking at the Dutch team, all those debutants. I know players who played for top clubs in the Netherlands, Spain, England and Italy, and they are currently facing serious financial challenges.”

What exactly can you do for these players?

“As Sport Legacy, we approach players with simple presentations. At the kindergarten level. ‘Peter, you’re signing your first contract. What kind of car do you want to drive?’ They often pick a car that’s worth a ton (100,000). Then we ask: ‘Are you going to pay for that car out of your signing fee, with your savings or with your salary?’ And then we want them to see that if they bought an apartment for two tons and rented it out, that renter will be paying for their car. The difference is that the ton spent on that apartment will be appreciating in value, whereas the ton spent on the car is always depreciating. That is the kind of awareness we want to create. And as soon as we do, the player realizes: that is true; it can be done differently. I can get that luxury item without spending my own money.

We are also quite confrontational. ‘If your salary were to stop today, what are your expenses? How much income do you generate right now, besides your career?’ And then we calculate how long it would take for that player to be bankrupt. I know a player in Feyenoord who doesn’t have to worry. If his salary stopped today, he’d be doing fine, financially, for another 86 years. But I also have players that are finished after three years and then we look at: ‘What other passion do you have besides soccer?’ Then you get to hear all kinds of interesting ideas. Opening a ski school or a personal gym. Together with those players we then look at how we can get that set up.”

What are you most proud of so far?

“That we have been able to get the attention of the soccer world in a relatively short time. I can’t say our name is fully established yet, but our presence is increasingly being embraced.”

The alliance between the free market and democracy

'Inclusion is not something that can be checked off'

Am I still on the right track financially? Ask your coach

"There's nothing I can do for my pension, even if I wanted to” Alexander is living on welfare

“Free time is more important than earning a lot”

"My life had to be more exciting"