Current issues related to economics, (responsible) investment, pensions and income: every week an APG expert gives a clear answer to the question of the week. This time: Thijs Knaap, chief economist at APG, talks about why many interest rates are rising - except those on your savings account.

The life of the saver has been no fun for years. Already since 2015, the interest rate on withdrawable savings, such as an Internet savings account, has been below 1 percent. The current rate is even a paltry 0.01 percent. And those who put too much money in the bank have to pay: most banks charge a rate of -0.5 percent on balances above a ton. At the same time, mortgage rates and interest rates on the capital market are rising. The logical question, therefore, is: when will the savings-minded citizen benefit from this? That could take some time, Knaap expects. There are various types of interest rates that rise or fall for a variety of reasons.

There is no point in getting frustrated with the banks, Knaap argues. “The rate on the savings account, a short loan, is regal compared to the market rate on short loans. This has been the case since 2009, in the midst of the financial crisis. You can see this clearly in a chart showing the savings rate and the rates banks charge each other for 3 and 12-month loans. The money that banks can borrow from each other is a lot cheaper than that of savers. In fact, banks pay each other around -0.5 percent to borrow from each other.” 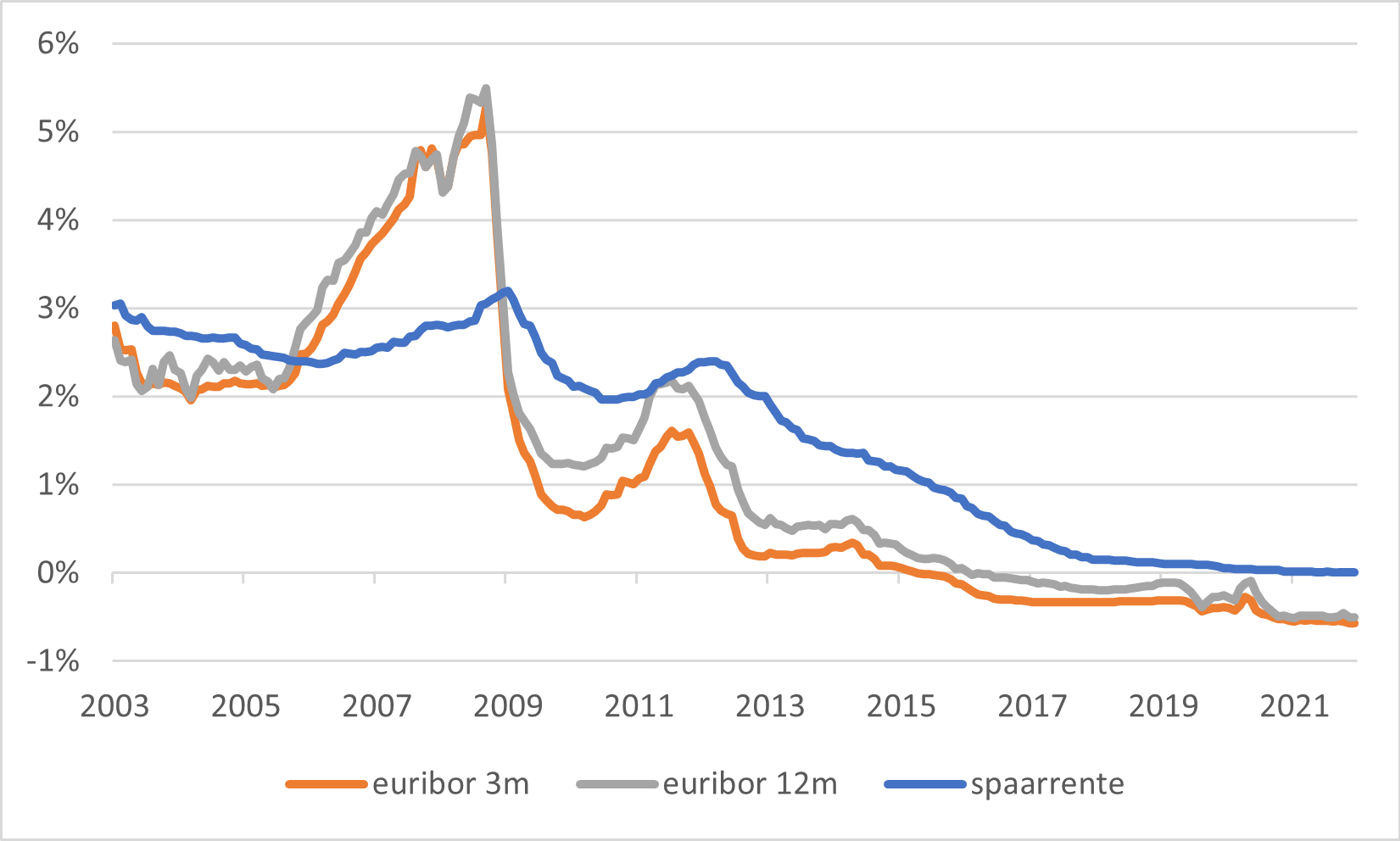 Data on DNB and Bloomberg

And then there is another place where banks can get money cheaply: the European Central Bank (ECB). “Since 2014, the central bank has been lending to commercial banks at a special rate, on condition that they re-lend that money to citizens. This TLTRO currently has a rate of -1 percent. So banks don’t actually need the savers to get money for their business. The only reason they offer the savings accounts is to bring in customers they can interest in their profitable activities, such as providing mortgages and managing large assets. Perhaps there will come a time in the future when savers can again be an attractive source of wealth for banks. This may also be a reason why banks are now continuing to offer savings accounts.”

But how come the newspapers are full of news about rising interest rates when market rates between banks are still so low? For that, it is important to note that not all loans are the same, and therefore, all rates are not either, Knaap says. “Interest rates are generally higher if the loan is longer, and also if the risk of default is higher. What we are currently seeing is that the fee is going up for both of those factors. So where the interest rate for safe, short loans is still very low, the interest rate for long and/or risky loans, such as mortgages, is rising again.” Unfortunately for savers, their savings account is a short loan (you can take the money out quickly) and it is to a safe party (often a Dutch bank), so the risk of default is small and the interest rate is low.

“The interest rate for safe, short loans is controlled almost entirely by the ECB with its monetary policy. It does that with the rates at which banks can deposit or borrow money from the ECB. The rule is that those interest rates go up if inflation rises too far above the target of 2 percent. In recent years, inflation was actually low, about 1 percent on average, and that is why we ended up with these low interest rates. But that picture has completely changed: now inflation in the eurozone is 7.5 percent. The expectation is therefore that the ECB will raise interest rates above the current level of -0.5 percent. The big question is how soon that will happen. The last interest rate increase was about 11 years ago and the ECB is still working on first closing its buy-back program (buying up debt to stimulate the economy, ed.) and the TLTRO. The ECB has announced that the buy-back program will be ready “in the third quarter”; only then can interest rates be raised.  Therefore, it will not be sooner than July. Financial traders are taking into account that the policy rate, a short-term interest rate, will rise to 0.3 percent by the end of this year.”

For savers with ordinary accounts, not much will happen before Christmas, Knaap expects. “As history shows, the savings rate rises only slowly along with the market rate. Small savers have been receiving a “subsidy” of 0.5 percent for a while now - their interest rate of 0.01 is half a percent higher than the market rate. That subsidy will first have to run out of current rates. If the policy rate does rise to 0.3 percent, interest rates on savings accounts could also rise, but I suspect that will take some time. However, it is possible that the term deposit, in which savers fix their money for a longer period at a higher interest rate than on a savings account, will make a comeback. Many banks currently no longer offer such a term deposit, because the interest rates for longer periods were also below zero. Now that the Dutch state is already paying almost 1 percent on a 5-year bond, it is possible that Dutch banks will again start paying a rate that can be seen without a magnifying glass. Longer-term interest rates could go up even further, especially if inflation continues for a while. Then it could again become attractive for savers to deposit their money on such a term deposit.”

Thijs Knaap at BNR about a changing economic regime

Thijs Knaap at BNR about Musk's offer on Twitter