"In my time we were more prudish, at age 12, we didn't know where children came from"

Was everything better in the past, or does 'now' also have its advantages? Different generations discuss social themes on the basis of statements. This time, Angela Ursem (49) and her father Claus (75).

Claus about himself: "I have three children and seven grandchildren. I have been working for Bouwbedrijf Ursem for about fifty years, a company that my father once started and that I and my eight brothers managed to bring to great heights. Unfortunately, it collapsed during the crisis. I'm now retired."

Angela about her father: "My father is very driven, he's always busy developing things and making things better for others. I also think he's very warm and sociable, he's always friendly and never loses sight of the needs of others. I think that's a nice characteristic trait. He's now enjoying his camper van in Portugal, but I know him as someone who's constantly on the go. He now finally is able to sit down and do nothing for a bit."

Angela about herself: "I was born and raised in Wognum, a village in North Holland, my parents still live there. I was the middle child. I now live in Amsterdam with my husband and two teenagers. Over the past ten years, I've worked as an interim marketing manager for many large corporations. Three years ago, I started a skincare company, Food for Skin, with my older sister, born from the urge to make the cosmetics world more sustainable. My sister has been a beautician for thirty years, I contribute all the marketing and commercial knowledge."

Claus about his daughter: "Angela was very independent from her early childhood. She is a woman who's doing well, she's very social, can be businesslike and also stands up for others. She is a precious daughter to us."

Statement: People used to look after each other more

Claus: "You know, in the past, you could hardly help but look after each other. I come from a big family; everyone had to chip in. In our village everyone was equal, there were no big differences in income or they didn't seem to exist. You helped each other, there was great solidarity. With today's possibilities, looking after each other seems to disappear. But on the other hand, people are still there for each other when needed."

Angela: "Something has definitely shifted, we've become much more individual. Not that we don't care about others or don't want to show solidarity, but life is a rush, a lot is expected and demanded of you, leaving less room for others. But as my father says: when the need arises, people are really willing to help each other. Fortunately, that basis is still there."

Statement: In the Netherlands, we're lagging in terms of women's emancipation

Angela: "I think that in the Netherlands, we're much further ahead in terms of women's emancipation than many other countries, but we're not quite there yet. Just look at that campaign recently, about how there are more CEOs in the Netherlands named Peter than there are female directors. Equality is important for everyone, not just women. Fortunately, I've never had any trouble proving myself. I stand my ground."

Claus: "I also think women's emancipation is important, women should be given the same opportunities as men. Yet I also thought to myself a few times: is it about the best person in the right place, or does it have to be a woman? I'm not always sure whether good choices are made in that regard. That said, there should be no discrimination in pay."

"When the need arises, people are really willing to help each other"

Statement: You have to be so careful with what you say these days

Claus: "Well, judging by the language they use in the House of Representatives, we don't have to be that careful. But more attention is paid to what you say and how you say it. That's important too. As long as you treat each other respectfully, I think you can say a lot."

Angela: "I think freedom of expression is a great and important asset. But that does not absolve us of our duty to take other people's sensitivities into account. Freedom of expression is not a license to offend people from other cultures or backgrounds. I think it's very important to be aware of who you are talking to and how it comes across. If something is sensitive, try to find out what's behind it: why does someone take it personally, and how can I do it better? I think it's enriching for everyone to continue to develop in this area."

Claus: "Well, in my day we were more prudish. When someone was washing himself in the kitchen, my mother would put a tea towel over the radio so 'the man in the radio' couldn't see you. The first naked woman on TV, Phil Bloom in 1967, was quite an event. At home we were bound to the church, nothing was allowed there. At age 12, we didn't know where children came from."

Angela: "I'm glad we can now freely talk about sexuality. The average magazine writes about it quite explicitly. That's fine with me, it shouldn't be something mysterious, like when my father was young. Sex is also discussed much more openly in schools. In that sense, I think we are less prudish now."

Statement: The gap between rich and poor will only widen

Angela: "I'm afraid so, looking at how society is developing. The number of rich people is increasing, and so is the number of poor people. Yet there are initiatives, also from the rich, to close this gap. Hopefully, that movement will be big enough to really make a difference. This is also necessary to prevent many problems in the long term."

Claus: "In my time, there was poverty everywhere. In the village where I lived, almost everyone was equal, with the exception of a few dignitaries who we felt were wealthy. We all felt pretty poor, but didn't really mind because everyone was the same. I come from a family of twelve and the trousers of the first one lasted twelve children. That's completely different now. I also think that the gap is getting far too big, something definitely needs to be done about that. Some of the big earners should lead by example, by using their large assets for charities. But it remains difficult to achieve."

Statement: Everyone in the Netherlands can have a good life

Claus: "What is a good life? The most important thing is that you're healthy and happy and that you can get by. I don't know if that's feasible for everyone. Basically it is, but there will always be people who, for whatever reason, can barely scratch a living."

Angela: "In theory, it's possible for everyone to have a roof over their heads and buy food but in practices we see plenty of examples of this not being the case. It also depends a lot on your definition of a good life, as my father says. It's a combination of factors. I can imagine that if you don't have a lot of financial resources, but do have a rich social life, you still think you have a really good life. There must be a subsistence level, but that is apparently not for everyone, despite all the regulations and subsidies. I find that distressing." 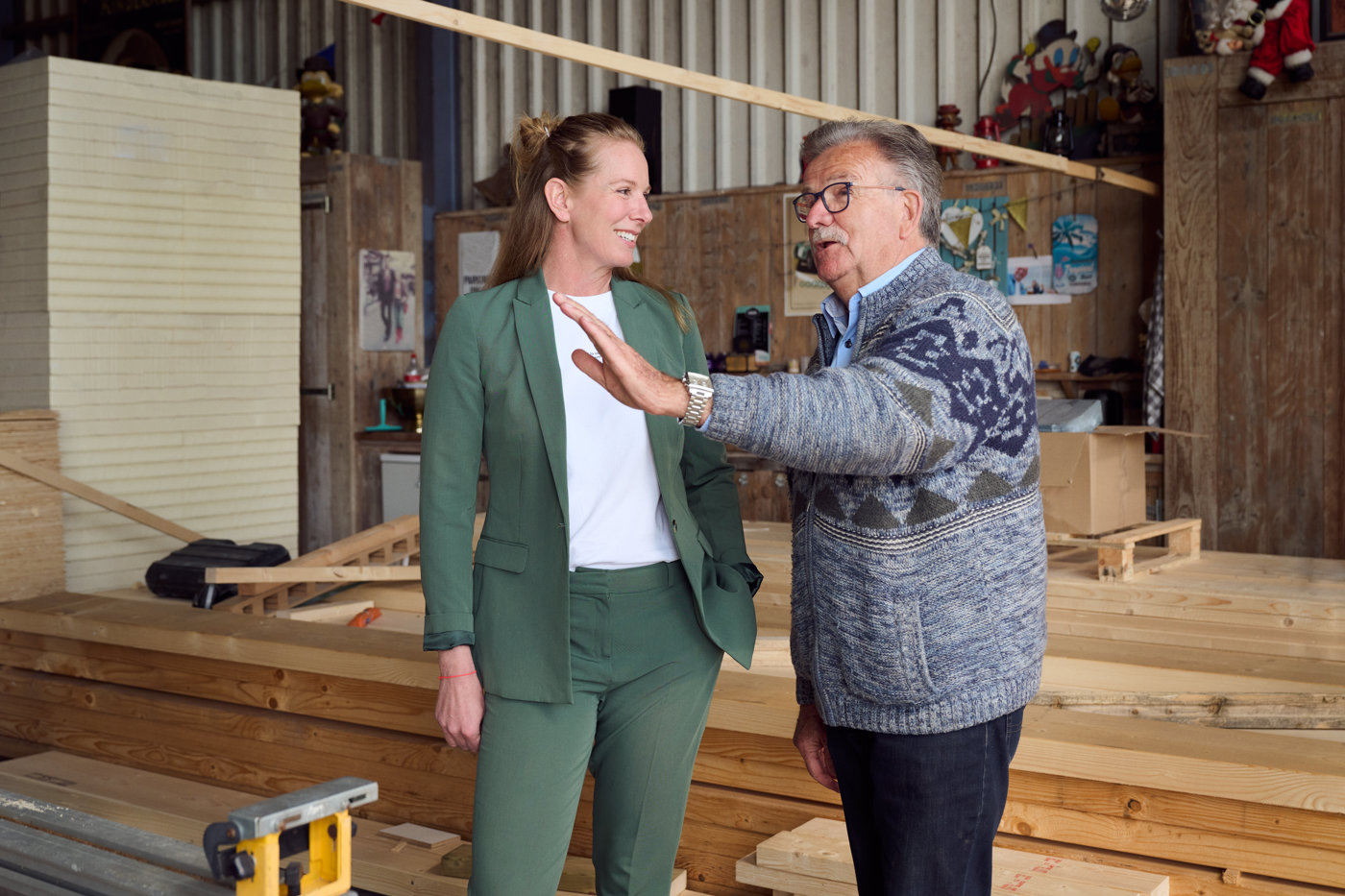 "Young people are no different than they used to be, the circumstances are different"

Statement: Today's young people are too well off

Claus: "People often say young people are no good, but I don't agree with that at all. Young people are no different than they used to be, the circumstances are different. When I was young, everything was much clearer, we had much less temptation. Back in my day, you didn't even know drugs existed. Today's young people have known few setbacks or poverty - with a couple of exceptions. They grow up with far more opportunities than we used to have. But does that mean they're spoiled? No."

Angela: "Again, define 'good'. Most young people can go to school and have the opportunity to study. Fortunately. Financially, I think they may be better off than in the old days. On the other hand, look at what they're faced with. They've hardly had a social life for two years because of COVID, there's a climate crisis hanging over them that they have to deal with and now there's a threat of war again. For my children aged 15 and 16, this has an impact on their lives and the choices they make. They face very different challenges than my father and I had to cope with. I think that nowadays, there's more attention and care for young people, for their individual needs, also at school. There is more personal support. Is that too good? I don't think so. It's just good."

Claus: "Yes, we need to constantly invent and improve new things. It makes many things easier. On the other hand, it also creates distance."

Angela: "I'm a huge proponent of technological progress, which is what we need when you look at the problems we face, such as the climate crisis and overpopulation. For that, we need behavioral change but also technology. We can't afford to stand still. I do think that with every invention we should ask ourselves: does it really bring us further, or does it bring new problems with it?"

Statement: Everything used to be better

Claus: "Ha, if you start talking like that, you're getting old. Everything used to be different, but certainly not better. Not for me anyway."

Angela: "That's beautifully said, dad. Everything was different, and everything will be different in the future. Everything is constantly evolving and it should be. You shouldn't resist it, you should embrace it."

Are transfer passengers at Schiphol airport really that beneficial to the Dutch economy?

“Half of all Dutch households are financially vulnerable”

What will we notice in the Netherlands of the discontinued gas supplies by Russia?

How does the more expensive dollar affect Dutch consumers?

My parents can always help out if I'm really struggling

“By July we will know how feasible the new system is”